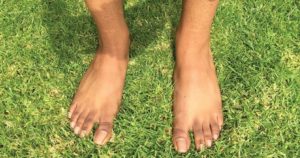 “Yeeaaah, definitely heel spurs. Both feet. See?”  The doctor points at a section in the middle of my right foot on the x-ray that really should be shadowy black, but instead shows white, almost as dense as nearby bones.

As early as February, when I participated in the five-day heartbeat workshop “Anatomy of Emotions,” pain in my feet has been excruciating.  They kept getting worse and worse, but I told myself I would only have to tolerate it until I finally manage to become enlightened, at which point pain would have much less influence on me.  Just keep practicing, I told myself.  If I practice with devotion, if I am relentless in interrogating the stories that limit me, and if I stay connected to raw, unfiltered presence, things will shift radically and this foot pain won’t be such a big deal.  Some days, I winced through every step, but still managed to find freedom and inspiration.  I even saw the pain as helpful, in that it brought me right into my feet and into the body.

After the “Elemental” workshop in April, my feet got still worse.  It would have been difficult to spot, as I still swooped and soared, but I knew I had to seek help, not just hope that enlightenment would eventually free me.  A friend suggested I visit an orthopedic doctor who specializes in working with extreme athletes.

After months of trying to get an appointment and waiting for it to arrive, I finally found myself in his office.  He explained the x-ray, “When the muscles and fasciae of the foot are very tight, they pull on the heel bone, inside the arch.  In response, the heel creates a little spur of bone for them to hang onto.  It is essentially made up of calcium deposits.”  He connected me with a physical therapist to would could teach me the MELT routine for working with painful feet, and proposed that if I could get the fasciae to relax, the pain from the heel spurs might decrease.

The doctor also noted that my feet, indeed my muscles generally, are very tight.  “I know.  Massage therapists always say that.  I do stretch, though; and I do a lot of work to release tension from the body…” “Oh, yeah, that’s just how some people are.  It’s genetic, to a large extent.” “Really? That’s super helpful.  I’ve always secretly thought it was some sort of character flaw.” “No, that’s just how some people are built,” he re-iterated.

On the way into class about 10 days after starting the MELT routine, I saw Tammy Burstein, the teacher.  “Tammy, I have heel spurs!  I just wanted to let you know.  That’s why I’ve been leaving early the last couple of weeks.  I’m trying to get them to calm down a little.”  She spoke as she moved across the threshold, “Work with the ground.  There is a lot to learn there.”  “Yeah, I know that’s right,” I said, still wondering if it might not be better to leave a little early.

After my appointment with the orthopedic doctor, I decided it would be wise to wear dance shoes to cushion my heels, at least for a little while.  I love being barefoot; and this pained me.  I also felt old.  And I feared that the injury would be permanent, that for the rest of my career as a dancer I would be gimped with pain.

I arrived to Tammy Burstein’s Friday Night Waves class on time.  My neck ached fiercely, perhaps from a few straight days of writing feverishly, working on several projects.  Some seeds that I planted in years previous have come up and it is with great delight that I set about watering and tending the young plants.

I reflected that people who dance 5Rhythms regularly seem almost inevitably to find their path–their unique, fully realized contribution.  It is remarkable, really.  I thought I was on one path, of being an artist, pushing the boundaries of artmaking, sacrificing, expanding, challenging and risking.  But life has revealed something entirely different.  And, to my great surprise, this one is perfect, too!

A couple of weeks after the doctor’s appointment, I finally met with the MELT practitioner to learn the routine.  She explained that MELT is a kind of massage you do for yourself, and that once I learned the foot routine and got a set of MELT balls I would be on my own.  Alternating between four balls of varying hardness and size, I pressed, rolled and wiggled strategic parts of my feet.  “This is really going to help me get to know my feet better,” I said as I rolled the largest, hard ball down each knuckle line of my right foot.  “There is something about the feet, the ground.  There is a humility to it,” I pontificated to my captive audience.  “I haven’t always been so good at humility.  To be honest, I’ve always preferred to soar.”

I thought about the experience of doing walking meditation, particularly when I am on a meditation retreat.  Sometimes to keep my mind engaged, I shift my attention from toe to toe in sequence and then to different parts of the foot.  Never had I so thoroughly articulated the different parts of the foot as I did on this day, however.  “How do you feel?” She asked.  “Do your feet seem a little flatter?”

After the MELT routine, she showed me some physical therapy exercises to help with general foot strength, including separating the toes and moving each one separately.  It was like trying to bend a spoon with the power of my mind.  As I bent over toward them and squinted my eyes in focus, the toes quivered with effort, then moved in unison.  Only the big toe could really move independently.  She assured me that I could develop the ability over time.

Tammy’s Friday Night Waves class has been my Friday night appointment every week for the last ten years.  On this night, nearly a quarter of participants were dancing the 5Rhythms for the first time.  Tammy instructed us to partner, then said “change” again and again, re-configuring partnerships, perhaps in part to move some chatty newcomers away from their BFF’s and deeper into the dance.

Because of the heel pain, I felt sorry for myself for a good 5, maybe 10 minutes and even sobbed briefly, dejected by the side of the room, moving only slightly.  Then it wasn’t so bad.  I could still move.  I still got a good groove and had all the energy I needed.  I let go of the story I was telling myself about the pain and it didn’t bother me as much.

Curiously, I was reminded of a period when I had lower back pain.  I loved to grind into the deepest edges of my back, to flip and coil, to roll and twist with vehemence.  Eventually, I realized that I had to back away from the edges in my back, to deeply soften.  In following years, I’ve learned to find precision and work with the same edges in a different way, and rarely experience pain.  Similarly, I realized that I have to back out of the edges in my feet.  A tiny, shrewd little pivot in the foot that catalyzes an epic, syncopated gesture throughout my entire body causes pain at the moment unless the heel is already fully released back and down.

Throughout the class I danced on my own and in partnership, with abundant energy and engagement.  The fierce neck pain totally disappeared; and I made it all the way through class, even surprised to learn that time went slightly over.  I moved with joy and ease, working with the ground periodically even during energetic experiments, jiggling and vibrating my hips with one partner, moving in blocked parts with a smiling, heavily muscled man, and moving in joyful, collective Chaos, creating my dance from the feet up, from the grass roots, from the foundation.

This blog consists of my own subjective experiences on the 5Rhythms® dancing path, and is not sanctioned by any 5Rhythms® organization or teacher.