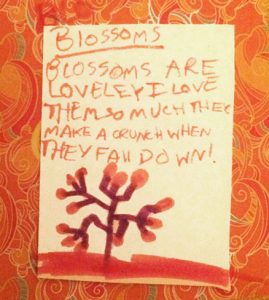 Though the day was chilly, things are finally starting to bloom after the long, grueling winter, and magnolia, dogwood, and flowering pear trees are heavy with blossoms all over the city.  Yesterday my eight-year-old son, Simon, and I took a leisurely bike ride, wandering aimlessly around our neighborhood and noticing the explosion of life all around us.  Eager to express the season, I was exactly on time to the Sweat Your Prayers session at the Joffrey in the West Village this morning, led today by Jilsarah Moscowitz.

I started in a squat, deep in the hips, stretching the inner thighs, feet and calves, rotating and staying low.  I soon found my way to the ground, where I continued to stretch and coil, rolling over the fronts of my shoulders, the back of my head, and through the hips, moving from my stomach to my back over and over in a wide circle.  Staccato arrived more quickly than I expected, and I burst upward with a knee-lifted back step and half-bent spin.

At the waves workshop “Elemental” that Tammy led last weekend, she offered a prompt that helped me to connect with Staccato.  Staccato was my first love, my first “home rhythm” when I started 5Rhythms practice over ten years ago.  Its sharp, expressive, fiery tendencies felt intuitive, well aligned to how I saw myself.

Then, after nearly two years of regular practice, I stepped into true Chaos for the first time.  For most of the first two years of practice, I don’t think I was ever actually in Chaos, though I certainly thought I was.  In retrospect, what I thought was Chaos was more of an agitated, super-fast Staccato.  When I finally found myself in Chaos, I was shattered.  Completely dissolved. Tear-strewn, windswept and erased. Clearly, Chaos was my home; and I embraced it with all my heart.

For the years that I considered Chaos my home rhythm, I did not have a strong connection to Lyrical.  I just didn’t have much access to it.  In fact, when I started to enter into Lyrical in a waves class, I would often be struck by some terrible, irrational fear.  When I practiced independently, I would pretty much skip Lyrical and Stillness, with maybe just a few passing gestures.  On the first day of Spring four or five years ago, on another occasion when Jilsarah led the Sweat Your Prayers session, she created the conditions for me to consider that I might actually have a lyrical nature.  And over the next few months, to my immense delight, Lyrical arrived in my experience; and I now consider Lyrical to be my home rhythm.

I never forgot my first love, but my relationship with Staccato has not been dominant for many years.  At the workshop, Tammy’s prompt created the conditions for me to draw fire into my body.  The beautiful, growling ferocity, the sheer relentless force of Staccato captivated me for long stretches.  It seems a worthwhile project: deepening, refining, clarifying and possibly even repairing my relationship to Staccato, and perhaps my ability to be ferociously kind, and kindly ferocious in the world.

Today in the Sweat Your Prayers, I continued to explore my relationship to Staccato.  My hips seemed to have learned a whole new list of vocabulary words, and were forming entire new sentences and paragraphs.  At one point, I planted my left foot firmly, setting up a physical problem to respond to.  I swung the right foot forward, walked it out, cast it back, sunk low and angular, rocked my pelvis, and played with isolating my back hip on just the right side, experimenting with levels and angles.  Then, I switched and planted my right foot, letting my left foot range as far afield as it cared to, moving far ahead and far behind, even making low steps to the side, again deep in the hips, and isolating the back hip to explore different levels and angles. When I let go of this constraint, I had built up tremendous force, and continued to move with vigor and specificity.

I kept playing with edges as the room transitioned into Chaos, enjoying the problem of resistance.  I joined with one of my favorite dance partners as Chaos began to lighten into Lyrical.  Though we have shared hundreds of dances, we continue to find new forms and patterns, and today our wild spins were peppered with shakes and coiled landings.  I continued to be led by my back hips, occasionally rising up from low with a big, diagonal back step and a dramatic raised arm, and sometimes bounding up high, fast and light, effortless, drawing on the kinetic energy of the inner thighs and hips.

Jilsarah referenced Connections, the third and final book written by Gabrielle Roth, the founder of the 5Rhythms practice, and invited us to consider the image of “threads.”  She spoke of following the threads of our lives, the thread of our breath, and the threads that connect us to each other.

A tone of reverence entered the room.  I moved softly, pulsing, twittering, surrendered to breath, still attentive to the hips, sometimes low, with my knees pressed together, coccyx pulling toward the ground, sometimes softly turning around the planes of my feet, moving through the room and noticing the overlap in energy fields, the blend of vibrant colors–bright pink, viridian, violet–as I turned gently, led by dragon trails and the room’s subtle currents.

I noted a minor story that played in my mind.  At times I felt left out. There seemed to be groups forming in the room that I was not part of.  There was one person in particular who kind of–how can I say this?  Kind of–energetically ignored me.  This was far from agonizing, but was both uncomfortable and interesting.

Was my perception accurate that the person energetically shut me out?  Do I do that to people, too?  This is something for me to contemplate.

I noted the story as thinking, the single most powerful strategy for annihilating all that blocks me from total presence.  Soon, I returned to expansive, delighted connection.

For the most part, the room seemed to be very flexible, with many different groups forming relationships, then dissolving back into the collective.  Even in engaged partnership, I danced slightly with the people on all sides of me at once.

Circling around to Staccato again in another wave, I joined with a different friend, moving to a reggae track in a patient groove, finding yet more ways to move the hips, this time from the hip creases, rocking the pelvis in loping, swooping gestures.

In Chaos, someone tromped on my foot.  I was not seriously injured, just annoyed.  I’ve had significant foot pain recently, so I extra disliked being stepped on.  Jilsarah noticed right away and left the teacher’s table to check in on me.  After a minute or less, I jumped back into the collective, in a particularly creative version of Chaos, with delightful unpredictability, micro-movements within larger gestures, and all sorts of plays on balance and levels.

In the final phase of Stillness, I went deep inside, moving subtle energies, muscles and bones whispering.  When I noticed the outside, more than half of the room had formed a hand-joined circle.  I continued to whisper-move, backing up to the edge of the circle and taking the two hands beside me.