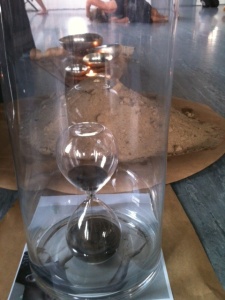 Lately I have been feeling embodied, creative, productive and inspired; and connecting with others has been unusually available. Sunday was notably different, however. In the Sweat Your Prayers class, which was taught by Amber Ryan, Martha Peabody created a visual contemplation of Memento Mori—an historical artistic theme that translates to “Remember Death.” Martha also led us in a closing ritual to grieve and remember a talented photographer and 5Rhythms community member who took his own life this week—Michael Julian Berz. On Friday night, Tammy, too, brought up the tragedy—with a ragged edge in her voice as she spoke.

The installation included a beautiful photo of Michael Julian Berz, an hourglass draining of black sand, a pile of rocky sand, white candles, and a curving line of silver, asymmetrical nesting bowls filled with water. All of these objects were set on the floor in front of the teacher’s table and placed on humble bits of cut brown paper.

Sunday I walked in with a headache. Saturday, along with my five-year-old son, Simon, I went from beach to party to party. At the last stop I had too many drinks. Simon was upstairs with the other children while the adults drank and talked animatedly in the yard. At the first party, there was no option for dinner, and Simon ate only cake and some small pizza-appetizer-things. When we got to the second party he fell into video games with his peers—something I generally discourage—and declined to eat. I let this go, and went to have fun with my friends. I told him to come downstairs when the clock said “nine-three-o” and (to his credit) he did, in fact, appear. For some reason, I sent him back upstairs for a few more minutes; and kept drinking. We finally left shortly before 11. At home, it was difficult to get him ready for bed because he was too tired to cooperate. Also, he had developed a cough; and he scraped his knee in a sidewalk wipe out, resulting in a long, seated bawl.

Waking up in stages, restless from before dawn, I regretted that I hadn’t cared better for my adored son or for myself. I have been feeling good lately, despite dynamic circumstances, but this drinking episode toned down my energy—my life force—considerably. I was by no means out of control, but it was enough to diminish the momentum of a good run.

Several occasions come to mind when I have been very open, then a serious drinking episode has arisen. Many years ago, I did a residency at an artist’s retreat center where there was also a meditation building. I received brief meditation instruction; and then, without any guidance or support, began meditating independently for many hours a day. The world glittered with spirit. I was drenched in it. A rainbow appeared one day as I prepared to enter the dining hall and I was destroyed with the beauty of it. I fell in love with everyone. After two weeks of this, there was a big party with a giant bonfire. I drank way too much and said and did things I am not proud of. From being drenched with spirit, I became instead depressed, fragile and withdrawn; and spent the remainder of the retreat thus.

The class Sunday was beautiful. I felt honored to participate in such a meaningful dance. Yet, at once, I felt depleted and distracted—not fully able to show up for myself or for my community. I found myself crying often, pockets of grief erupting, and, too, taking in the grief of the other dancers. Though we stayed in Chaos for song after song after song, there was never catharsis. Most of the feelings that came up for me remained unresolved. Sometimes I have the honor of directly dancing the grief of spirits, but this time, though I offered myself up; I remained too opaque to truly embody my offering.

Life is so infinitely tiny, so infinitely fragile. I simply don’t have any moments to spare in self-induced distraction, in anger, in limitation, in hesitation. I hope I can stop cultivating those things in my life—for example by not overdoing it with drinking at key moments when I have somehow managed to escape my self-imposed limits and expand into infinite possibility.

Amber instructed us to let repetitions come through and to fully express. Sometimes it is in these energetic glitches that spirit breaks through, manifesting in our gestures. I found myself close to the floor, touching it often, even casting an arm down inside a spin. Every repetition that I found involved either the ground below me or the space above me.

Since I was given a Reiki energy-healing empowerment in July, I have been thinking more about self-protection. Not protection that involves aversion or pushing anything away, but protection that involves remaining porous and at once carefully cultivating my own life force. It also involves avoiding things that diminish life force, so that I may be powerful and happy, and so that I may be of service. My human Reiki guide said, “Stay strong and attuned to your highest self and all will flow.” Somehow, contemplating the passing of Michael Julian Berz, a widely-beloved human, made this thought present even stronger.

I am writing in a café and a Nirvana song just began. I can’t help thinking about Kurt Cobain, another artist who took his own life—likely with similar agony—leaving many questions, regrets, torn hearts, and such a touching body of work. It is just so sad. It is hard not to perseverate on this. All the people I know who died by suicide or with unresolved pain come up now. As Amber said in a conversation recently, in part “it just sucks.” There is not always beauty there is not always deliverance there is not always peace. Please let me die with grace when my time comes. Please let me respect how everyone chooses to exit, instead of dwelling on the pain and sadness and fear that arises. Truthfully, my biggest fear to die alone, sad, small; and that is exactly what comes up in the face of this.

When I was at Cape Cod with my family one year, a very old woman planted her cane in the sand and walked into the ocean. The cane looked so resolute, casting a little hooked shadow as the sun moved across its arc. We noted the cane with curiosity all day, and later learned that the old woman had disappeared—never seen again. I love the beauty of the woman’s gesture, but I am tortured forever imagining her last moments—not able to breathe, taking in water. Perhaps she was at peace, or perhaps she regretted her decision after it was too late, wishing for one more embrace, one more kind word, one more sunset, one more chance to connect. My Gods it hurts to feel that. I have to just gulp breath in.

At the end of today’s class, I danced with a friend who I have an incredibly powerful connection to. We moved energetically—spinning, stomping, leaping—and moved in and out of attenuated shapes, balancing each other’s gestures, often extended sideways, balancing on one foot, reaching to the farthest edges of ourselves.

At the end of the class, Martha guided us into a hand-held circle, communicating the initial directions through gesture, not words. She led us in a ritual then, employing the objects of her installation.

I couldn’t quite land at the end of class. Amber put another song on and I moved gently for a little longer while friends greeted each other and caught up. I felt fragile, on the verge of tears, depleted. I didn’t really want to go out into the big , scary world. I lingered and lingered, wondering if I could handle it.

Earlier today, I asked my little son if I could give him a big hug. Knowing that he loves to be picked up though he weighs over 50 pounds, I said, “I will pick you up.” He said, “No, no, Mommy. Don’t pick me up. I don’t want you to hurt your back,” as he held his arms around my neck, hugging and kissing me.

Michael Julian Berz was a talented photographer and beloved member of the 5Rhythms community. He created many of the most iconic images of 5Rhythms teachers and practitioners, miraculously capturing the intangible grace of spirit and inspiration as it arose in his subjects.